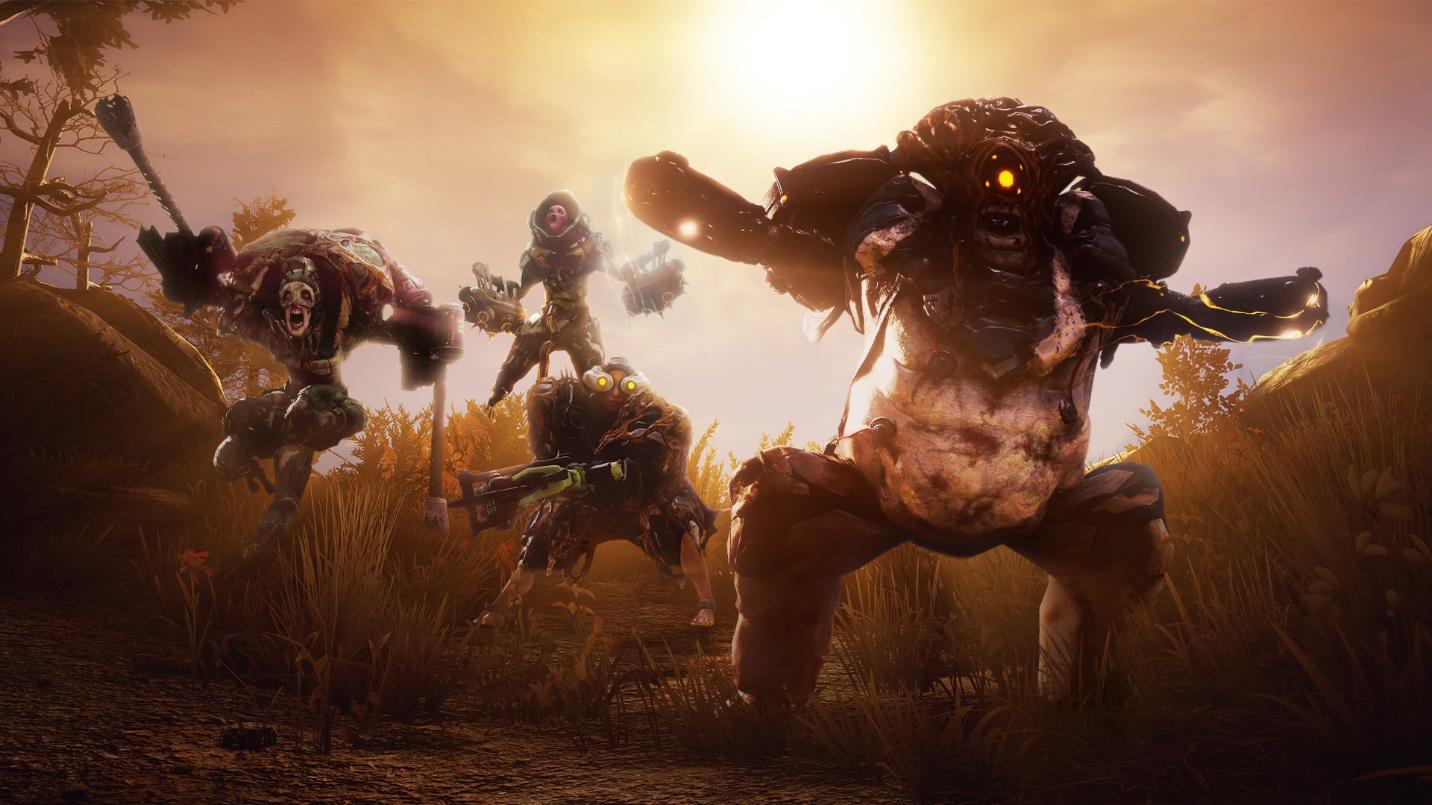 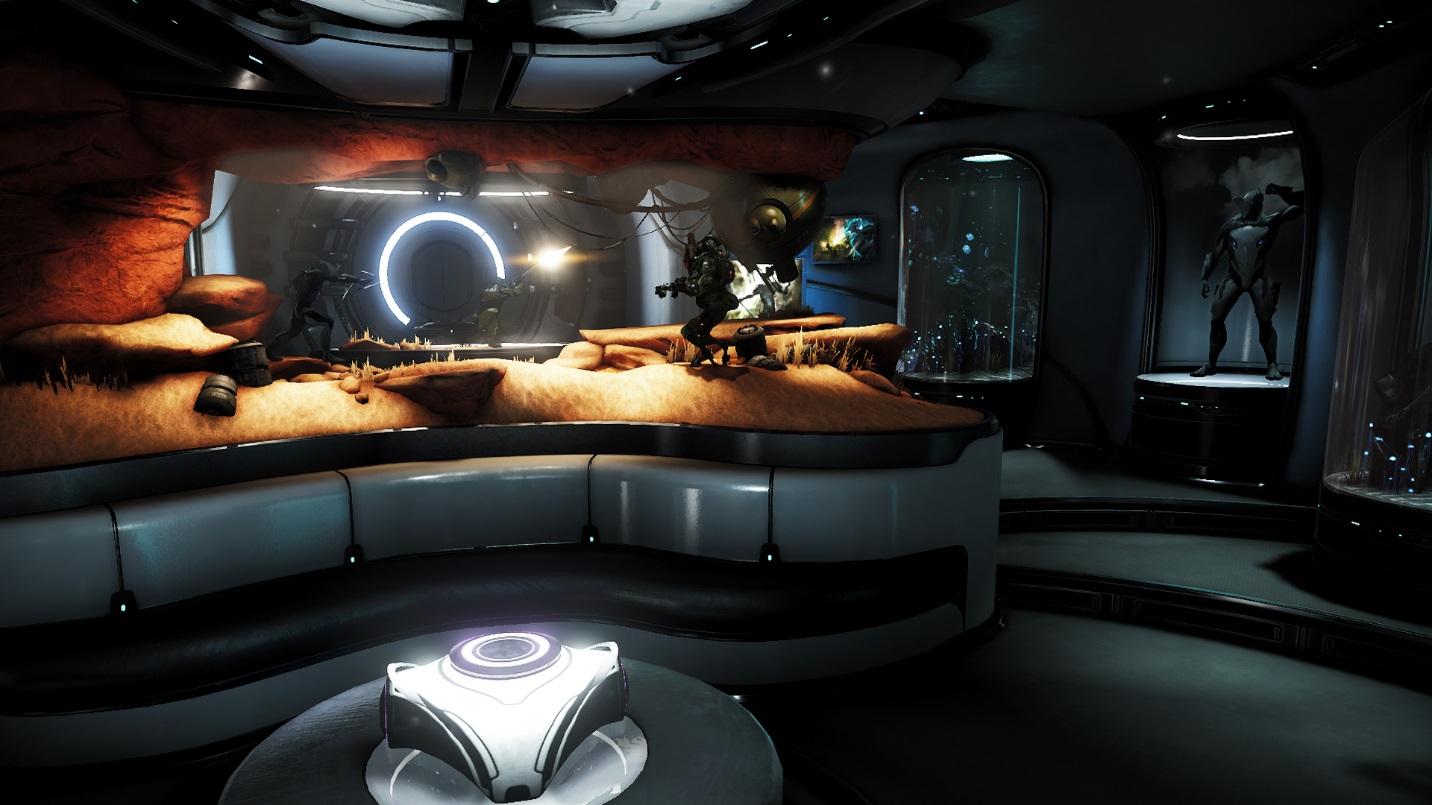 Ghoul threats have arrived! These recurring bounties feature the Ghoul monstrosities. Help defend Cetus and destroy the Ghouls…. but their destruction may not be permanent! Expect the Ghouls to re-emerge regularly.

*Starting today, you can meet face to face with these ugly beasts roughly 30 minutes after the update launches, and can run the Bounties until February, 6th!

GHOUL AUGER
Known colloquially as the ‚drill sergeant‘, the Augur is fast-grown into its enhancements. As with all Ghouls, no regard is given to the proper development of its higher functions. Cantilevered leg augments propel the unit toward the fray at speed, while over- and under-mounted extendable drill carriages magnify both reach and penetrating power.

GHOUL AUGER ALPHA
Whether through aberrant cognition or sheer brutality one specimen always moves to the front of each pack. It is from this individual that the other units take their lead.

GHOUL DEVOURER
Vay Hek’s personal favorite, the Devourer is a maximal terror unit. Draped in shreds of the diapause bag that birthed it, this gap-mawed monstrosity barrels toward prey with furious intensity. Wrist-mounted hooks are welded to elbow joints and hyperpowered by a myotechnological winch system for maximum impact-and-pull.

GHOUL EXPIRED
The Expired are Ghouls who have succumbed to malnutrition or environmental poisoning during the early stages of development. Their backup nervous systems continue to drive them forward, however, making them ideal suicide troops.

GHOUL EXPIRED DESERTER
Why this emaciated monstrosity chose to abandon its pack remains to be seen.

GHOUL RICTUS
So named for its terrifying leer, the Rictus (AKA ‚the Sawman‘) lives to divide and conquer its foes – literally.

GHOUL RICTUS ALPHA
This specimen shows evidence of advanced cognitive abilities and greater, if rudimentary, situational analysis. Cold blooded and ruthless, t is easy to see how this specimen led its pack so ably.

Dynamic Weather in the Plains of Eidolon!

The Plains of Eidolon now have changing weather patterns! This new dynamic weather system brings rain, lightning, rolling thunder, as well as fluctuating wind and cloud patterns. The Plains can shift from sunshine to rain (and vice versa) during the day and night, and rain will linger for a reasonable amount of time.

Jumping in puddles isn’t the only good thing about being out in the Plains during the rain! Take advantage of increased fish spawns and reduced visibility for the Grineer while it is raining.

A rain slider has also been added to the Plains of Eidolon Captura Scene. Adjust the slider from a light trickle to total downpour and capture your dramatic side!

Since the launch of Focus 2.0 in Update 22: Plains of Eidolon, you have shared your thoughts and suggestions on where we could improve on Operator gameplay as a whole. Focus 2.5 is a reflection of what we’ve learned through your experiences and acts as a jumping-off point for future implementations that need more consideration before they reach you (daily cap removal for example).

The following have been refunded so that you may redistribute as you please:

We have added shared pool capacity! You can now upgrade your pool size using the points from any School you wish, which increases the maximum capacity for every school all at once.

You can increase pool capacity from your active tree. Simply select a School of choice as your “primary” and use its Focus points to increase the shared pool capacity.

The ability to increase capacity from within the tree itself still exists, but these points will contribute to the shared pool instead.

The costs of unlocking nodes across all trees have, on average, been reduced by almost 30%. The table below compares what a 5 rank passive node (like Zenurik’s Energy Pulse) costs before and after these changes:

Incursions in Plains of Eidolon Caves:

The following Incursions can now occur in Caves scattered around the Plains: Exterminate, Assassinate, and Cache Recovery. The objectives in these Incursions are the same as they are in the Plains, but there is now a chance for these to randomly take place in caves!

CORINTH
Deliver a massive punch with each blast of this shotgun, or launch a round that explodes mid-air knocking down nearby enemies.

Find this weapon or its Blueprint in the Market today!

Find this weapon or its Blueprint in the Market or Tenno Research lab today!

Find this weapon in the Market or from Ghoul Bounty rewards today!

Find this weapon in the Market or from Ghoul Bounty rewards today!

MAGGOR SYANDANA
Victory over the Grineer, draped across your shoulders.

MAGGOR ARMOR BUNDLE
Grineer plate, trophies from battle on the Plains of Eidolon.

Invite Players to Your Orbiter!

Warframe’s shared-world experience now expands to your Orbiter with the option to invite your friends to come aboard! Players have been requesting this feature ever since we introduced the Landing Crafts back in Update 14. If you played back then, you’ll remember cabin space was very limited, but it has expanded over the years. To make room for your squad, we’re expanding your Orbiter further by adding the new Personal Quarters!

To receive the new Personal Quarters Segment Blueprint, you must complete The War Within. Players who have already completed the quest will receive the Blueprint automatically in their inbox.

*Note about invites: Declining an invite to Orbiter will prevent additional invites for 15 seconds. Repeatedly declining invites will increase the 15 second duration.

Vignettes: Choose the centerpiece of your Personal Quarters from the following 8 Vignettes. Each Vignette adds its own ambiance and flare to your space.

Purchase Vignettes individually from the selection list, or all of them from the “Vignette Bundle” located in the Market.

Stencils: Add some color and theme your Quarters’ walls with Stencils!

Purchase Stencils individually from the selection list or from the Market.

Aquarium: Bring home the fish you’ve caught from the Plains with your own Aquarium! Simply select “Customize Quarters” to pick the tank you want to house fish from your inventory. Fish will be removed from your inventory, but can be retrieved at any time from your tanks.

Warframe Display: Put your Warframe on display! Choose from your loadouts to showcase your best look in full scale.

Somachord: Add ambiance to your Orbiter with the Somachord! Unlock songs by locating and scanning Somachord Tones scattered throughout the Solar System. Find them all to complete songs!

To accommodate all the new decorations, capacity has been split into 4 different areas (Transference Room, Helminth Infirmary, Personal Quarters, and everything in between) with a capacity of 1200 EACH to hold all your ship’s flair.

And since we know some of you really enjoy personalizing your Orbiter, we will be overhauling decoration placement to be more streamlined in 2018! These currently unreleased changes (discussed in Devstream #103) will include grid snapping, placing floating decorations, and much more!

Warframe Articula: Posable scale models of your favorite Warframes are here! To place, open your decoration tool and select “Warframe Articula”. Once you’ve found the perfect spot, customize by selecting from your existing loadouts, choosing a pose from the “Warframe Gun Pose Set”, and swapping weapons! Due to their complexity, Articula take more Capacity than most decorations so placement will be limited. For example, you won’t be able to place a large number of Articula like you can with Noggles.

Trees, Planters and more!
Explore a new line of decorations including some plants and decorative toys for your Companions!

There is a new Operator customization option available: School specific animations!
Zenurik, Naramon, Unairu, Madurai, and Vazarin have their own set of idle animations. These are freely for the school of your choice. If you unlock each school, each set becomes available for your operator!

The intent of the following changes is to make fishing a more harmonious experience for you and your squad! Until now, Bait, Dye, and Pharoma has only exclusively affected the player who used it. Moving forward, all squadmates will receive benefits from Bait or other fishing consumables in the Plains. The fish you see will still vary from player to player, however, the effects of these consumables will be shared across all members.

When making this change, we also reviewed how each of these consumables worked and tweaked them slightly for the sake of consistency and balance:

*In order for Luminous Dye and Pharoma to work within this system, they are now thrown like bait. They float in the water and affect all fish in the same body of water within a certain radius. This way you can cast out the Dye in one place, and all players will see the fish get highlighted as they swim near it. Multiple Dyes can be used at once, if you want to affect a larger section of the water.

Finally, we made the following changes and fixes to fishing:

Gara is still relatively new as far as Warframes are concerned but since her release, we’ve found (and many players have found) that an invulnerable and almost impenetrable barrier doesn’t allow for a very engaging gameplay experience. We know that other Warframes also have Powers with similar issues, but adding a shattering component to Mass Vitrify is a change we could easily implement that is consistent with Gara’s glass theme while also making Mass Vitrify more interactive.

With these new changes, we can tweak the absorption and explosion values as necessary to make sure Mass Vitrify is both fun and effective. Please keep your feedback constructive and let us know what you think after you’ve had a chance to test these new changes.